Bypass UAC and AV on Windows 7

It's being a long time since I wrote my last tutorial, so I'm coming back folks with a new one that implements some basic penetration techniques like msfconsole and introducing a couple of amazing tools for our purpose such as Shellter.

Shellter is a dynamic shellcode injection tool, and probably the first dynamic PE infector ever created. It can be used in order to inject shellcode into native Windows applications (currently 32-bit apps only).

The shellcode can be something yours or something generated through a framework, such as Metasploit.

Shellter takes advantage of the original structure of the PE file and doesn’t apply any modification such as changing memory access permissions in sections (unless the user wants), adding an extra section with RWE access,and whatever would look dodgy under an AV scan.

You can find more information about Shellter and some very nice tutorials that have been created by my friend @kyREcon in the official page from where you can download it for both Windows and Linux platforms.

(Note: For the Purpose of this tutorial BackBox (Based on Ubuntu) as OS, the latest installation updates of Windows 7 SP1 OS's will be used)

We assumed that we have exploit our target machine and we have an open session.

Interacting with our session we can identify that we are running on Windows 7 SP1 with low privileges (main user privileges).

If we try to get the high privileges we are retrieving the following error because UAC preventing us of running not authorized processes.

Metasploit provides an exploit in order to bypass the UAC controller but as I can see our exploit is been captured from Microsoft Security Essentials as Trojan:Win32/Swrort.A 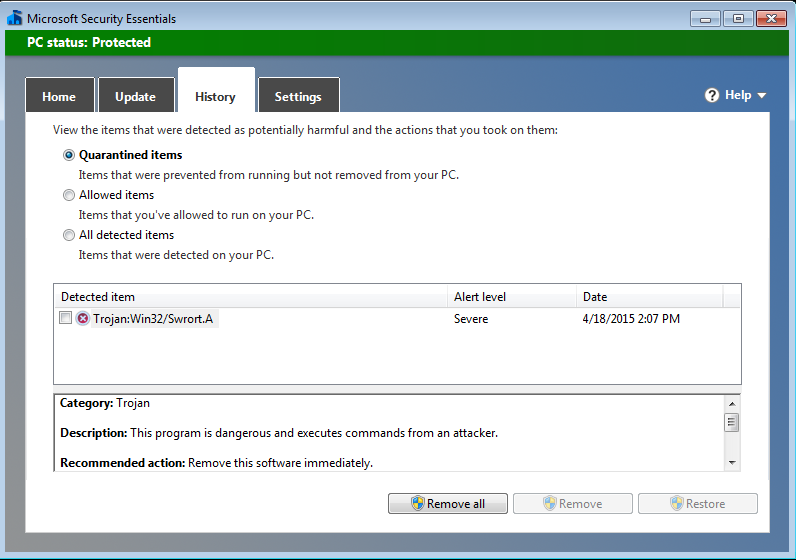 and our exploit is failing due to this prevention.

Now it's time Shellter to take part for this purpose. For the simplicity of this tutorial I will explain how to create the payload using the Basic option that Shellter provides. If you already checked the official page of it you know that Shellter can provide more expert ways and of course some nice video tutorials "How to do it".

The process that I followed is outlining bellow:
Create the payload raw file

Generate the executable file with Shellter and provide the payload

Now let's go back to our our open session and upload the file that Shellter created and also the ByPassUAC.exe that Metasploit provide for us.

So, lets configure the new listener for our payload and fire up the metasploit again to see if finally we will have access.

From our opened session it's time to trigger our payload through the executable. So run the following command from shell prompt:

Let's try to get the high privileges into the machine which is System and not Admin (be careful on it!)

Checking our executable payload on VirusTotal we got a really nice results:

Of course using more advanced techniques we can minimize the inspection ratio of our payload but during this tutorial we discover some basic commands retrieving useful information about our target and the power of creating undetectable executable payload using Shellter and the way to get the highest privileges on a Windows system.